Dance Umbrella continues to expand the reach of its work in outer London Boroughs in 2021 as we visit Watermans Arts Centre in Brentford.

Taking over the building for two days, join DU for a live dance double bill with DU Festival debut dance artists Dani Harris-Walters and Kesha Raithatha. There’s something for all the family, as Japanese artist Takeshi Matsumoto brings his immersive and interactive dance show Club Origami. In the cinema, enjoy an International Dance Short Film Programme curated by Omari ‘Motion’ Carter. Around the building, look out for free public dance workshops spanning a variety of dance styles and join host Jennifer Irons for a live dancesploration of where contemporary dance came from in dance-theatre piece DanceStory.

We are in Brentford, West London and are well served by public transport as well as having on-site parking.

Train: We are only a short walk from either Brentford or Kew Bridge stations, served by South Western Trains

Tube: Gunnersbury and South Ealing are the nearest tube stations. From Gunnersbury it’s a short bus ride on the 237 or 267. From South Ealing, take the 65 and you’ll be with us in 5 minutes.

Car: We have a covered on-site car park. Parking is free for 30 minutes so you can drop off and pick up or pop in to collect tickets – please ensure you enter your car registration number and display a ticket. Thereafter, a charge of £1.50 for up to an hour will apply (up to a maximum of £8). There are spaces reserved for disabled visitors on the upper level, but a BLUE BADGE must be displayed if you use one and you must register your number plate at our Box Office in order to validate your free parking. On occasions when the venue is full parking can become congested so please leave a little extra time when attending these events. Additional parking is available in the multi-story carpark 300 metres to the west of Watermans behind the Premier Inn.

Bike: There is secure cycle parking on the terrace outside the Box Office

Our building is fully accessible. If you have any specific access requirements please inform the Duty Manager or Box Office Team on 020 8232 1019, before you arrive if possible.

We have added a pop-up Box Office outside the cinema to reduce the amount of travelling you need to do within the venue and to aid audience flow as part of our Covid-secure measures. You are able to give your vehicle registration number and book carer tickets at this Box Office if you wish. We do recommend you book ahead wherever possible by phone however.

Dani Harris-Walters is a Dance Artist, performer, choreographer, teacher & DJ who immerses himself within realms of Hip Hop culture and theatre. An experienced figure in the industry, he loves to experiment, reform and restructure movement from many dance styles to create a unique and distinctive dance language.

Graduating from University of East London with a BA Honours degree in Dance: Urban Practice, Dani propelled into the Hip-Hop theatre world working with Tony Adigun’s Avant Garde Dance, touring nationally and internationally both The Black Album and Fagin’s Twist co-produced by The Place, touring the UK & China.

His first job came as a professional dancer in the London Olympic Games 2012 Opening Ceremony being a part of the Second to the right, and straight on till morning cast, performing with NHS workers choreographed by Temujin Gil.

Within the theatre world he has also worked with many of the leading names in Hip Hop Theatre including the Olivier Award Winner Botis Seva | Far From The Norm, Ivan Blackstock, Just Us Dance Theatre’s Born To Manifest, and the infamous Boy Blue Entertainment in their production Blak, Whyte, Grey touring the UK, America and Taiwan.

Kesha is a dancer and choreographer who embodies Kathak and Contemporary movement. She creates work that is rich in detail and experimentally reconsiders contemporary South Asian dance. Her curiosity and exposure to a wide range movement training informs and invigorates her dance-making vocabulary. In 2021, Kesha was appointed as one of the Associate Directors at Aakash Odedra Company; Work Place Artist at The Place Theatre London and a Resident Creative at The Curve Leicester.

Her primary Kathak training began under her mother, Priti Raithatha and Smt. Nilima Devi M.B.E. with whom she accomplished 6 National ISTD examinations.

Born and raised in the Yukon, and now over 20 years living in the UK, she has been getting people together to dance since she was five years old.

She is Co-Artistic Director of award-winning arts and technology collective MakeAmplify and is Founder and Director of ironINC in Africa; arts for cultural exchange program working with local partners across Africa and the Middle East to co-create and deliver arts programs for professional and social development.

Yukon Ho!, her one-woman cabaret style guide to surviving the arctic, is on tour in the UK from Spring 2022.

Omari ‘Motion’ Carter is a screendance practitioner, lecturer and body percussionist based in London and, for the past decade, has been choreographing, teaching, and performing for music videos, film, television, and theatre. A first-class BA (Hons) degree in Performing Arts at London Metropolitan University led Omari to perform for 7 years in the West End and international touring productions of ‘Stomp!’. During this time, Omari choreographed, directed, performed, and produced a varied reel of dance on film work with Screendance production company, The Motion Dance Collective, which he founded in 2011.

As an independent choreographer and dancer, Omari has created works for Google, Britain’s Got Talent, Weetabix, Stanton Warriors, Greenpeace UK, Diabetes UK, and ADAD (Association of Dance from the African Diaspora).

A graduate from the world’s first master’s degree in Screendance at London Contemporary Dance School (LCDS), Omari went on to become associate lecturer in Screendance at the University of East London, University of Lincoln, and LCDS. Most recently Omari was co-curator of Akademi Dance-Film Festival 2021, Digital Creative for Pavilion Dance South West, on the event programming team for San Souci Festival of Dance Cinema (USA), and features twice in Vol. 12 of The International Journal of Screendance which was released earlier this year. motiondancecollective.com

Jesal is a Kathak Dancer trained by her Guru Gauri Sharma Tripathi.

Having trained and performed for over 25 years in this discipline, her dance career has seen her tour all over the UK, Europe, USA and India where she has performed at many major high-profile and site-specific venues.

Jesal leads ‘Dance Well’ workshops, offers performances in hospitals and other projects with Akademi. She also toured and keeps connected with Nutkhut, Half Moon, Sampad and Ankh Dance UK.

After graduating from London Contemporary Dance School with First Class Honours in 2013, Ellyn joined EDge14, touring internationally as a postgraduate company. She went on to complete her MA at LCDS in 2018, focusing on the significance of dance education in young males. This interest stemmed from observations made while teaching at The Place for a number of years and was heavily influenced by outreach work carried out in schools in the Camden and Lambeth areas of London. Ellyn continues to teach adults and children at The Place, as well as delivering workshops for dance organisations such as Chisenhale Dance Space and Age UK.

Geni Lou is an independent hip hop dance artist and producer. Originally from Montreal, Canada, Geni has established herself as a strong female voice within the UK’s Hip Hop dance scene by performing on multiple platforms, presenting her own work (The Place, V&A, Woman Srsly, 100Luxe, Breakin’ Convention), teaching for renowned organisations and judging events throughout the country and abroad.

Geni has contributed to dance ecology by working as a Producer for Bust A Move Festival, Bboyizm Dance Company, The Place (Changemaker Programme), A.I.M Collective and is an alumni of the first cohort of WeMove Programme. Geni is currently the Strategic Manager for the Street Dance CAT Programme at Swindon Dance and a member of the board of trustees of B. Supreme UK. 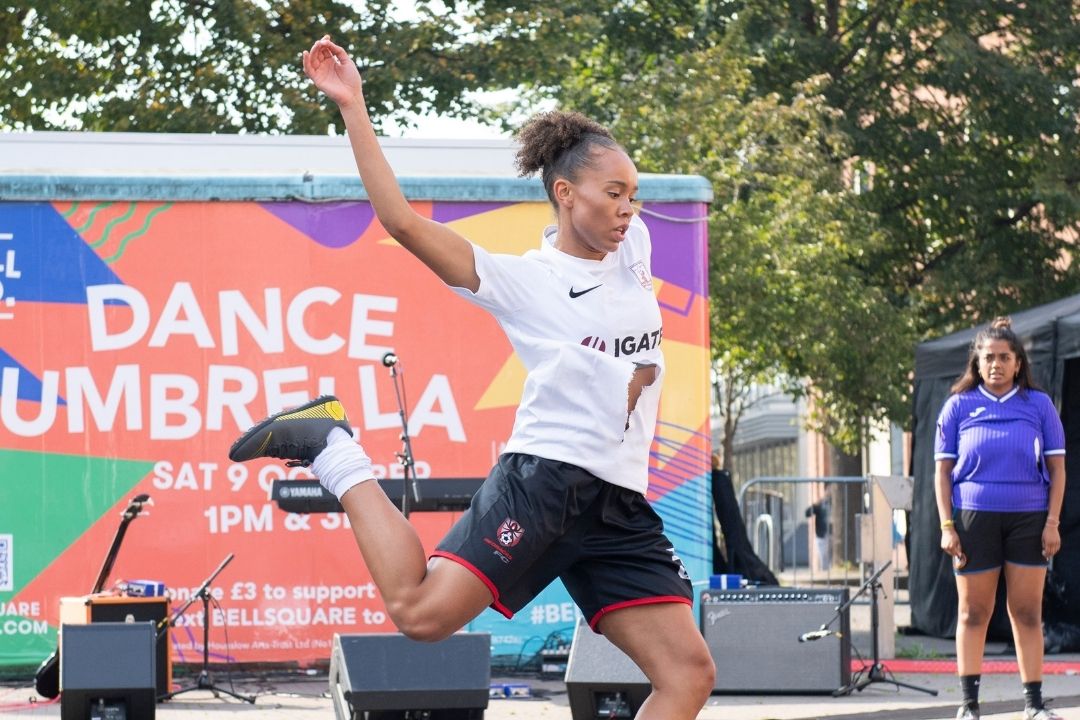